BUA student assists with Bible translation to his native language 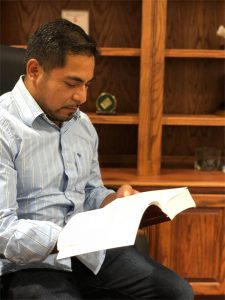 Nicolás López-Merino’s involvement in translating the Old Testament into the Amuzgo language shaped his trajectory and led him to study theology and music at Baptist University of the Américas.

Not many people have heard of the Amuzgo language, which is spoken by approximately 50,0000 indigenous people in the Guerrero state in southern Mexico.

Amuzgo is the first language of Nicolás López-Merino, a third-year student at Baptist University of the Américas, who helped translate the Old Testament into Amuzgo.

Wycliffe Bible Translators came to López’s hometown, Xochistlahuaca, and began learning the language. In 1973, they successfully translated the New Testament into Amuzgo, but for the next several decades, translation of the Old Testament scriptures was incomplete.

When López was a young man, he was asked to help with the translation process. He and locals from different churches were needed to assist with text revisions. They started revising Genesis in 2003, working in group settings. López said one person would read, and the others would listen. 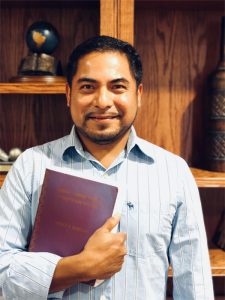 Like translating from English to Spanish, the text could not be translated word for word, requiring López to understand the concepts and essence of Scripture and communicate those in his own language.

During the more than 10-year-long process, López came to the United States to pursue his academic studies. He received a call from his home pastor in 2016, with the news that the entire Bible finally was translated and ready to be printed. López continued his involvement in its completion by helping financially with printing costs.

López describes the practicality of having the Bible in Amuzgo, as well as the joy it brings him to have the Scriptures in his first language.

“When I can’t understand [the Scripture] well in a foreign language, I go to this Bible,” said López, who is perfecting his English at BUA. “When I read this Bible [in my own language], it’s a special time. When I pronounce the name of God in my language, “Tyˈo̱o̱tsˈom,” it is awesome!”

López smiled, pointing out his home community now has access to the entire Bible in its first language. His community is bilingual, speaking Spanish as a second language. Since they have the Scripture in their first language, they can understand many things that were challenging to comprehend in Spanish.

Less than 10 percent of the Amuzgo are practicing Christians, estimates The Seed Company, a Bible translation group. López believes the translation is critical for reaching his home community with the truth.

The Amuzgo Bible impacted López’s family. It opened their eyes to faith in Christ, freeing them from dead religion, he noted.

He wants everyone in Guerrero—as well as Amuzgo speakers in the neighboring state of Oaxaca—to have access to the Amuzgo Bible. His dream is to plant a Bible Institute or seminary in his home state of Guerrero, saying it is on his heart to be part of a translation team.

“If they [the translation team from Wycliffe] didn’t come, I wouldn’t have a reason to be here at BUA,” López explained. “I am here because God has called me to serve him.”

López added that pursuing a dual bachelor’s degree in theology and music at BUA is about following Christ. “I am also really grateful for BUA because it is helping me to understand and learn more about Jesus.”

For audio of López reading John 3:16 in his language, click below.