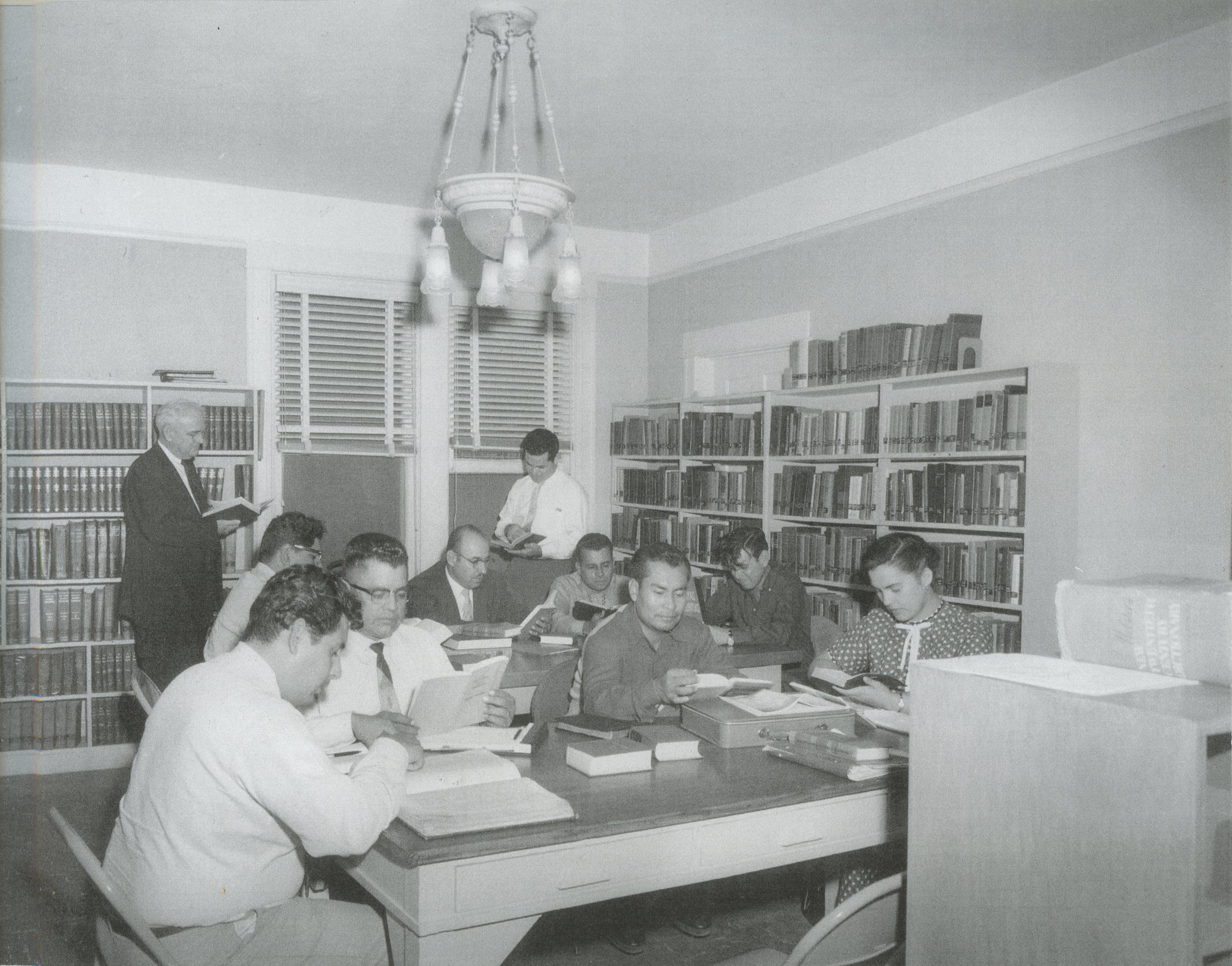 For almost 70 years, BUA staff and students have responded passionately to the call of God to serve Him with all of our “heart, soul, mind and strength.”

Baptist University of the Américas began life as the Mexican Baptist Bible Institute in San Antonio in 1947. The Institute started under the auspices of the San Antonio Baptist Association, conducting its first classes in the evenings at Palm Heights Baptist Church.

The Institute changed its name to Hispanic Baptist Theological Seminary, then to Hispanic Baptist Theological School and, in 2003, to Baptist University of the Américas as the scope expanded to granting accredited college degrees while maintaining the focus on training ministers for Hispanic churches. We accept eagerly the challenge expressed by our mission statement: “the formation, from the Hispanic context, of cross-cultural Christian leaders.”

From its inception in 1947 until 2000, the primary language of instruction was Spanish. For most of those years, the school offered a non-accredited, non-certified diploma in traditional seminary areas like Bible, Religious Education, and Music. Even though the school was not accredited or certified by the State of Texas to offer degrees, the institution provided quality education within the context of the Mexican culture. Graduates moved fluidly into successful ministry positions throughout Texas and the United States. With the exception of those who came from Latin America, Puerto Rico and Spain who already had theological education, most Baptist Latino(a) ministers in Texas were trained either at the school or one of the affiliate Bible institutes.

The school experienced some of the best years in enrollment and support during the 1970s and 1980s. Gifted educators taught during those years such as Dr. Josué Grijalva, Dr. José Rivas, Dr. Alcides Guajardo, Dr. Daniel Rivera, Dr. Fermin Flores, Dr. Abdias Mora, and Dr. Sylvestre Ayala. However, the school suffered a decline in enrollment during the 1990s when programs were dropped and reduced. Discussions circled about the possibility of closing the school. Nevertheless, leaders made the decision to invite Dr. Albert Reyes as President of the school, and a new period of growth began. It was during Dr. Reyes’ tenure that in 2003 the school received authorization by the Texas Higher Education Coordinating Board to grant Bachelor of Arts degrees and received full accreditation by the Association for Biblical Higher Education. In 2007, René Maciel was invited to serve as President of Baptist University of the Américas and under his leadership, a period of sustained growth and deepening of its historical roots has been taking place.

Several factors and events have contributed to the strengthening and development of Baptist University of the Américas over the past 16 years. In 2000 BUA changed the primary language of instruction to English, primarily to facilitate the road to certification with the State and accreditation. The change to English also made it possible that BUA could expand its reach to a greater diversity of students and thus increase its impact on the community at large and on the Kingdom of God in general. Hispanic students whose primary language is English and international students who aspire to Christian higher education in the United States could enroll and prepare themselves toward becoming cross-cultural Christian leaders. Since then, BUA has been reaping the benefit, because of English instruction, of enrolling students from multiple cultural/language groups such as African-Americans, Anglos, Koreans, Dutch, Hungarians, Japanese, Turkish, Indian and students from Africa and non-Spanish speaking Latin American countries. This added diversity has consistently improved the educational experience of all students. This cross-cultural experience enriches the ministry potential for success among BUA students.

Three major events took place in 2003: the Texas Higher Education Coordinating Board granted a certificate of authority to offer a B.A. in Biblical/Theological Studies, the school became fully accredited by the Association for Biblical Higher Education (ABHE), and the school adopted the name Baptist University of the Américas (BUA). With accreditation and certification, BUA students are able to transfer credits to other Baptist institutions, other ABHE schools, and seminaries. Prior to 2003, graduates usually needed to attend another Baptist University an additional two or three years in order to receive a B.A. in Bible or religion. Including the time to learn English, the process to attain a B.A. took a full-time student six to eight years. Since 2003, BUA students earn their B.A. and can transfer directly into Master’s programs at ATS seminaries and many religion departments of Baptist universities.

Accreditation also made it possible for BUA to expand its curricular offerings and thus open the way for promoting the development of its students in multiple areas of study. In 2006, BUA added the Associate of Arts in Cross Cultural Studies degree, followed by a B.A. in Business Leadership and a B.A. in Spanish in 2008. In 2012, BUA started the B.A. in Music, and in 2014, the B.A. in Human Behavior. The selection of areas of study has been done through careful reflection upon the mission of the University and on the potential for future expansion. The multiple degrees continue to emphasize ministry preparation but offer to our students the possibility of developing their own interests as well as pursuing multiple venues for graduate studies.

In 2015-2016 enrollment reached its highest level with a total of 336 students in the fall semester and 286 in the spring semester in all programs (degree programs, certificate programs, and ESL). The undergraduate programs experienced a strong registration in all areas of study. True to our mission, the B.A. in Biblical/Theological Studies enrolled the largest number of students (78 students in the spring semester), followed by the B.A. in Business Leadership (61 students), and the other programs with an average of 24 students among them. In May 2016 we graduated 30 students with baccalaureate degrees.

Our certificate and ESL programs continue to grow and to serve students and churches in their needs. Both programs enrolled each an average of 35 students per semester in 2015-2016. In addition, the certificate program, under the name of Baptist Bible Institute, continues to bless congregations in Texas, the U.S., and around the world with a solid biblical and theological education delivered at the point of need and in the language spoken by those congregations. Currently we have over 34 extension centers that serve over 400 students.

From 2003 to 2016, BUA graduated 349 students with Bachelor of Arts degrees. Of these, 121, or 35%, entered a Master’s program at an ATS school or in a graduate program at accredited universities. BUA students have enrolled in graduate programs at institutions such as Baylor University (Graduate School and Truett Seminary), Dallas Baptist University, Logsdon Seminary, Wayland Baptist University, Wake Forest University Divinity School, Southwestern Baptist Theological Seminary, Central Baptist Theological Seminary, Midwestern Baptist Theological Seminary, Princeton University Divinity School, Yale University Divinity School, Texas A & M University-Commerce, Texas State University, and The University of Texas -Pan Am among others. Many of these students are serving in multiple capacities in churches (as pastors, music/worship ministers, church planters, and other areas of ministry), serving at community ministry organizations, teaching public school, teaching at colleges and universities, and working in the general work force.

BUA currently receives a diverse student body, predominantly Latino (about 90% among the American students). Our international students (28% of total spring enrollment) represent 20 different countries and speak 11 different languages. We also count on a diverse and well qualified faculty who serve our students with excellence and individualized care. This cultural and ethnic diversity provides a strong statement of commitment toward our cross-cultural mission. It also represents our efforts to demonstrate the hospitality promised in the Kingdom of God where all are welcome and have a place at the table.

This welcoming and vibrant environment is felt at Piper Village, our student housing complex, where since 2008 we have been able to offer excellent accommodations to single and married students. In the spring semester of 2016 we housed 76 single students and 36 families at Piper Village.

Finally, in order better to serve our students and to continue our journey toward excellence, we acquired a new campus, a single building, re-designed as a college campus to promote a sense of community and, at the same time, foster student learning. We moved into the Baugh Building in July 2016 and will start the 2016-2017 academic year in a home that will serve our BUA community for years to come. The new campus signals our new journey toward the future we have envisioned and have accepted as God’s calling: Baptist University of the Américas, with the context of its Hispanic heritage, will be the standard for educating all students for Christian ministry and missions to change our world!